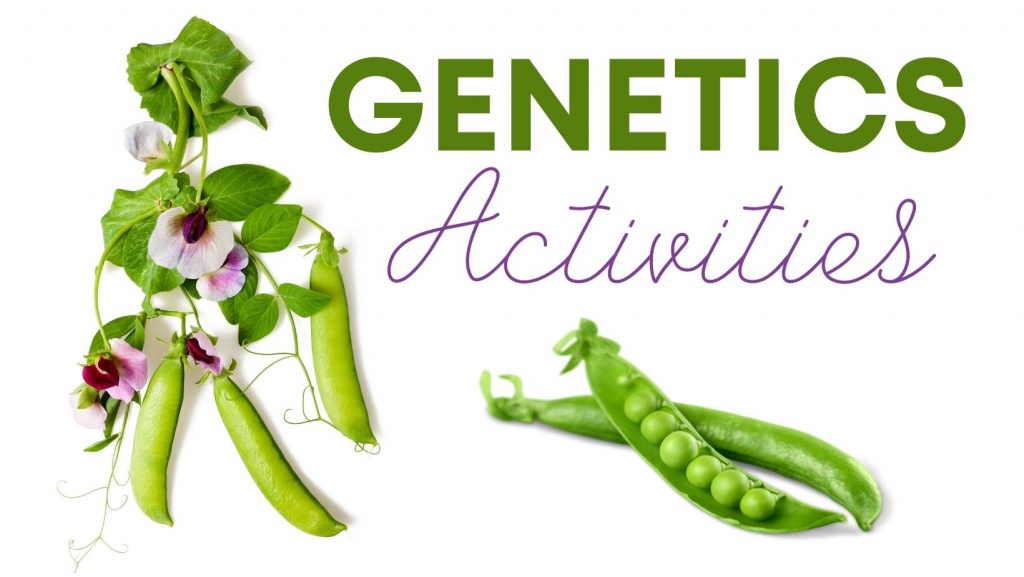 These genetics activities were designed for those working on their genetics badge, but other badges you may wish to earn alongside include badges such as Human Body, Biology, or Botany.

No study on genetics would be complete without learning about Gregor Mendel, an Austrian monk who lived in the mid 1800’s.  Mendel noticed that when comparing two pea plants, there were obvious differences.  Some were tall while others were short.  Some had white flowers while others had purple.  Some of the pods were smooth and others were wrinkly.  Mendel’s curiosity was peaked, and he decided to do some experiments to see if he could find out why.

Mendel controlled which plants pollinated other plants to see if he could figure out how the traits were passed down from generation to generation.  What he discovered is still used today.  Mendel found that some traits showed up more often than others. These are known as dominant traits.  Those that showed up less often are referred to as recessive.  A blend of two types of traits is called a hybrid. While Mendel didn’t know about genes, he did speculate that there were 2 factors for each basic trait and that 1 factor was inherited from each parent. This was the beginning of genetic research.

To Do: Watch a short video on Mendel and his peas to get a brief introduction to genetics.

To D0: Read “Gregor Mendel – The Friar Who Grew Peas”

(As an Amazon Associate I earn a small commission from qualifying purchases such as the book link above.)

While hybrid and dominant plants or animals may look the same, they have a different genetic structure. Each gene has two copies of a trait called alleles. A tall hybrid plant might look like it is carrying two tall alleles, but in reality, it might be carrying one tall and one short.  Only the dominant trait shows. The genotype is the actual genetic makeup of a plant or animal while the phenotype is what that plant or animal looks like.

To do: Breed some “Eggheads.” You will need:

Activity: Have each child come up and choose 2 eggs from those with pipe cleaners inside. They might both be yellow, both blue or one of each. Explain that blue is the dominant color and yellow is the recessive color. Have them open the eggs and take out one pipe cleaner from each egg. These are the alleles for the child of these two “Eggheads.”

Now have the kids grab a new filled egg to mate with their “child” to create new parents. Open the two eggs and remove one pipe cleaner from each. These are the genes of the “child” the two eggs, and the “grandchild” of the original 2 eggs. Have the kids come up and get an empty egg to place their new genes in that corresponds to the correct phenotype.

Have the kids discuss how dominant and recessive genes show up in what their egg heads look like from one generation to the next. If you have a large supply of eggs you can continue this for several generations.

A Punnet Square is a simple diagram that is composed of a grid, usually of four boxes, and is used to calculate all the combinations and frequencies of the different genotypes and phenotypes among the offspring of two parents. If you are not familiar with a Punnet Square, visit “Baby Steps Through the Punnet Square” to learn how they work.

To Do: Create a Punnett square for two gene types of a single trait. For example, you could use brown eyes (dominant) and blue eyes (recessive). What would be the results of one brown eyed parent and one blue eyed parent. What if the brown eyed parent had one blue gene? For older kids, create squares for more than one trait.

Have you ever been told you look like your mom or dad? Genetic traits are passed down from generation to generation. Some recessive traits may skip several generations only to show up again in a future descendent.

To Do: For younger kids Read “The One and Only Me” by Ariana Killoran. Find at least three dominant genetic traits that have been passed down in your family for at least three generations (grandparent, parent, child). This might be an eye color, hair type, skin color, nose shape, etc. Maybe your family is known for large feet, or lots of freckles. Genetic diseases like psoriasis may also be passed down. Then see if you can find at least one recessive trait. Are you the only person in your immediate family with red hair? Can you trace how far back the last person in your family was that had red hair? If you cannot do this exercise with your own family, do it with a friend’s.

(As an Amazon Associate I earn a small commission from qualifying purchases such as the book link above.)

Genetics With A Smile

Sciencespot.com has a unique way to teach genetics along with a lesson on probability. By flipping a coin to determine a variety of genetic traits you will draw a variety of “smiley faces,” each slightly different based on your coin flips.

To Do: Print out the Genetics with a smile PDF. You will need a coin and colored markers or crayons for each child. Follow the directions on the form.

For older kids, you can also print out their follow up quiz along with the answers answers to smiley project:

Edible Model of a Double Helix

Little Bins, Little Hands has a great lesson plan for learning about DNA and creating an edible double helix.

To DO: Create an edible model of a double helix and label the parts.

For centuries farmers have been selectively breeding plants and animals to modify DNA and produce better food sources, but this natural process takes time and it can be decades before you get the result you want. Recently though, scientists have taken it one step further and rather than wait for breeding over time to get the desired result, they have found ways to insert DNA directly into genetic structures to create plants and animals that mother nature never intended.

GMO food is a hotly contested topic with some people thinking it is perfectly safe and others fearing that messing around with DNA could have unknown consequences. Do you eat genetically modified food? Find out.

According to the USDA, “The use of genetic engineering, or genetically modified organisms (GMOs), is prohibited in organic products. This means an organic farmer can’t plant GMO seeds, an organic cow can’t eat GMO alfalfa or corn, and an organic soup producer can’t use any GMO ingredients. To meet the USDA organic regulations, farmers and processors must show they aren’t using GMOs and that they are protecting their products from contact with prohibited substances, such as GMOs, from farm to table.”

To DO: Have a discussion about the advantages and disadvantages of this type of genetic manipulation? What are the moral implications of genetically modifying animals or humans?