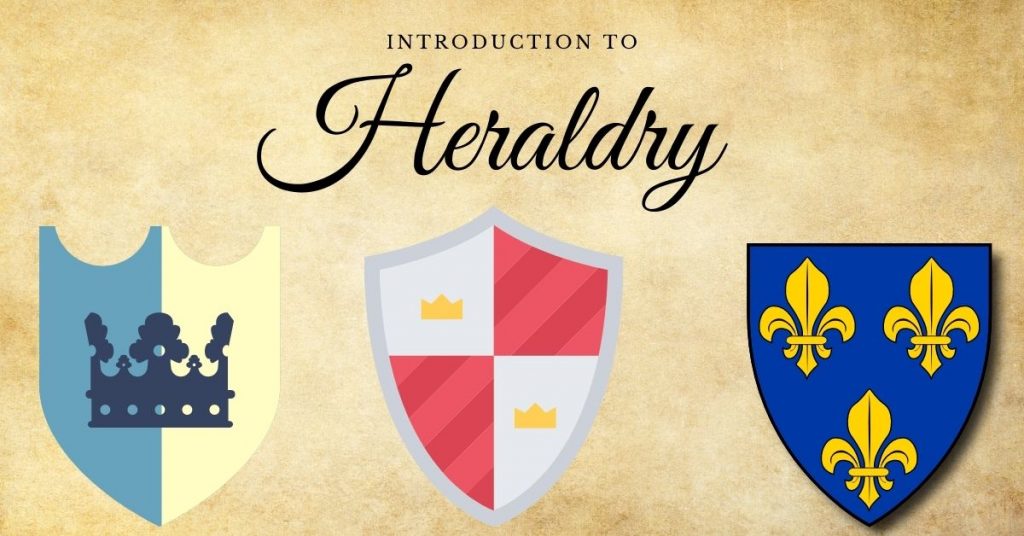 A coat of arms brings to mind many things: King Arthur and the Knights of the Round Table, brave knights in shining armor rushing into battle, and grand pennants flying above castles.  Did you know that every shape, color and image on the coat of arms has a different name?  Use the following heraldry activities and lesson plan to earn your Heraldry badge and find our more about this fascinating piece of history.  Other badges you may wish to learn alongside include the Historic Era (Medieval) Badge, Knights Badge, or Genealogy Badge.

In heraldry, a “coat of arms” is the unique picture or shield that represents a person, family, corporation (like a business or school) or even country.   It is about showing people who you are.  In England, it is thought that heraldry began when knights started wearing helmets over their faces and couldn’t be easily recognized.  As a result, they started painting different combinations of colors, shapes and animals onto their shields and banners to show who they were.  Only one person was allowed to use a specific pattern so that even if you couldn’t see their face, you knew who it was.  Traditionally, heraldry is the practice of creating, describing and granting armorial insignia.

Heraldry is also used in the of tracing and recording of genealogies in many countries around the world. Katie Cordy has a short video introduction to heraldry and the parts of a coat of arms. Use this heraldry lesson plan and activities below to learn what the imagery means and design a coat of arms of your own.

To learn about traditional heraldry, you must first understand the colors, shapes and symbols used in a coat of arms and what they are called.

The simple shapes used on heraldic shields are called “ordinaries.”   Think of them as wide lines that divide the shield in a variety of ways.  Each has its own name.

Heraldic tinctures are the colors and patterns that make up the field, or background of the shield.  They include 5 basic colors, two metals and then a series of patterns referred to as “fur”.  The fur represents the actual fur of an animal.  For example the ermine pattern represented by a white background with a black design is supposed to represent the white winter fur of stoats with their black tail tips.  The vair pattern represents squirrel skins in blue and white.  If an animal is shown in its natural colors it is called “proper.”  The base of a shield may be designed all in one color, or may be divided into two or four sections, each with a different color.

To Do:  Print out the images of the tinctures and ordinaries above and cut into cards.  Place face down in two piles.  Now have kids draw a simple shield with a single tincture and ordinary.  For example they may choose a purple field with cross. Randomly choose one tincture card and one ordinary card and see if anyone drew a matching shield.  If so, they get one point.  Continue to choose cards until at least one child gets a point.  Once a match has been made, have the kids draw a new shield.  Shuffle cards in each pile and draw again.  The first child to 3 points wins (or 5 or 10 points depending on the number of kids participating.)

Heraldic charges are the symbols that decorate the shield.  They may appear on the background, the ordinary or both.  Some coats of arms has a single large charge while others may have several smaller ones.  Common charges include flowers, crosses, rings, crescents, stars or diamonds.  Animals are also common charges.  Lions, rabbits, deer as well as other common animals can be used.  Sometimes the animal is depicted lying down and sometimes rearing up.  They may even appear to be walking or spreading their wings.  Mythical beasts like dragons or manticores were also used.

To Do:  Learn to draw nine different charges from a dog to shell with a simple Youtube tutorial from drawstuffrealeasy called “How to draw 9 heraldic designs Real Easy – for your Coat of Arms”. Animal charges usually had symbolism attached to the animal.  For example lions represent bravery.  Hares or rabbits represent speed.  If you choose an animal for your own design, think about what that animal represents for you.  The English Heritage organization has a fabulous printable coloring book with 12 different traditional heraldic animals depicted along with their meaning.

Design Your Own Coat of Arms

Now that you have learned about basic heraldic design, it is time to design one of your own.  Think about the shapes, colors and symbols that represent you.

To Do:  Design a coat of arms for yourself.  Katie Cordy has a simplified How to Draw a Coat of Arms tutorial on YouTube. If you need templates or printable resources, try Paul Ingrams page on coats of arms. He has links to a variety of shield templates as well as Google folders filled with a variety of charges.

Blazonry is the art of describing a heraldic coat of arms with word.   The emblazon is the actual picture on the shield itself.  The blazon therefore should allow any heraldic artist to draw the emblazon the same way as any other heraldic artist simply by the description of the blazon.  The blazon first describes the field and then the charges of the arms.  When describing the charges you must list the placement, number, type and the tincture of each in that order.

The history of Heraldry dates back nearly a thousand years.  Visit the Britannica website for an in-depth look at the origins and development of heraldry over time.  Then learn about the College of Arms, the only official English authority for confirming the correctness of armorial ensigns or for granting new ones to those who qualify for them.  Did you know that even American uses heraldry?  Learn about our blazon and the symbolism behind it at the American Heraldry Society website.