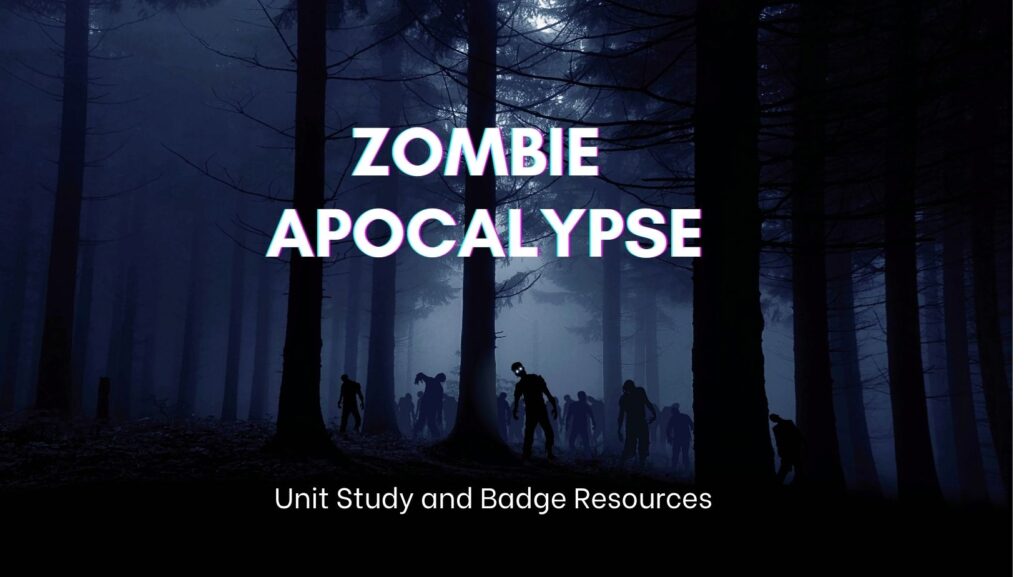 How to Survive a Zombie Apocalypse – Unit Study and Badge Resources

How to Survive a Zombie Apocalypse – Unit Study and Badge Resources

What better badge to focus on during Halloween than the Zombie Apocalypse and how to survive it. These walking undead appear in the folklore of many cultures around the world. The CDC and Pentagon even hold official zombie apocalypse trainings. Use this free Zombie Unit Study to learn more about these decaying creatures and earn your Zombie Badge. Other badges you may wish to earn alongside might include topics such as Emergency Preparedness, Halloween, or Mythological Creatures (specific.)

Warning:  This badge may not be appropriate for Preschool and Level 1 depending the sensitivity of your child and the way information is presented.  While younger children may earn this badge, it is recommended that this badge be earned by children at  Level 2 and above.

What is a Zombie?

So what is a zombie exactly? Any corpse that has been reanimated via the supernatural is considered a zombie. Depending on the folklore or story, this may happen via witchcraft, Voodoo, sorcery, an act of a god or even a virus. Zombies are usually portrayed as will-less beings with great strength and rotting flesh. In pop-culture, their sole desire is usually to feed on brains.

According to History.com, some people today who follow the Voodoo religion, believe zombies are people revived by a voodoo practitioner known as a bokor.

Bokors are known to use herbs, shells, fish, animal parts, bones, and other objects to create potions known as  “zombie powders.” These concoctions contain tetrodotoxin, a deadly neurotoxin found in pufferfish and some other marine species.

Tetrodotoxins, used in sub-lethal doses, may cause zombie-like symptoms such as difficulty walking, mental confusion, and respiratory problems.  These symptoms are common descriptions of zombie behavior.  Used at high doses, tetrodotoxin can lead to paralysis and coma. In some cases, this could cause someone to appear dead and be buried alive and then later revived. Many believe that this is where the history of zombies began

To Do: Play a game of zombie tag. There are several versions from simple wide games played outdoors on a field to week long campaigns that can involve an entire school or community.  For a simple wide game, choose one person to be the zombie and everyone else is human.  When the zombie tags a human, they become infected and become another zombie.  Play continues until there is only one human left who becomes the initial zombie in the next round.  Groans, and yelling things like “I need brains!”  are encouraged to add a bit more fun to the game.  For a larger, longer campaign, play Humans VS Zombies where the zombies try to consume the humans and the humans try to starve out the zombies.  Socks ( or sometimes marshmallows) are the defending weapon of choice as they stun zombies and allow humans a chance to get away.  Complete rules can be found at https://humansvszombies.org/ (Warning, there is some bad language on the site, but the game is clean and a lot of fun to play.)

Zombies in Folklore and Pop Culture

Modern day zombies originated with Haitian folklore and the VooDoo religion. In the 1600-1800s, according to The Atlantic, “Haitian slaves believed that dying would release them back to lan guinée, literally Guinea, or Africa in general, a kind of afterlife where they could be free. Though suicide was common among slaves, those who took their own lives wouldn’t be allowed to return to lan guinée. Instead, they’d be condemned to skulk the Hispaniola plantations for eternity, undead slaves at once denied their own bodies and yet trapped inside them—soulless zombies.”

The myth evolved slightly in the early 1800’s and became part of the Voodoo religion. Haitians practicing VooDoo believed zombies were corpses reanimated by voodoo priests known as bokor. These sorcerers used their bewitched undead as free labor or to carry out nefarious tasks.

The modern idea of zombies and their popularity in pop-culture can be traced back to a film from 1932 called “White Zombie.” Until this movie, zombies were usually considered to be of African decent. In the film, a young white couple named Madeleine and Neil are talked into getting married on a Haitian plantation. The owner secretly plots to seduce the bride using a zombie potion he gets from local Creole mill owner (played by Bela Lugosi).

1968’s “Night of the Living Dead” became one of the most profitable film productions ever made at the time. The story follows seven people who are trapped in a rural farmhouse in western Pennsylvania, which is under assault by an enlarging group of cannibalistic, undead zombies.

Most recently, “The Walking Dead” TV series rocketed zombies into nationwide popularity. By its third season, The Walking Dead attracted the most 18- to 49-year-old viewers of any cable or broadcast television series.

To Do: Zombies are created in many different ways depending on the folklore and culture the story comes from.  Write your own creation story on how zombies came to be.  How do your zombies behave?  Are they good or evil?  How can they be killed?  Do they have a purpose?

To Do: Watch three different age appropriate zombie movies or TV shows. Compare the differences in how zombies are portrayed. The links to the movies listed below will take you the Common Sense Media website and a detailed description of the movie/tv show and why it may or may not be appropriate for your family.

TV Shows (most are only appropriate for high school and above)

How to Survive a Zombie Apocalypse

A zombie apocalypse is when all of civilization collapses and is over run by zombie. The few remaining survivors must navigate this new and dangerous world without dying or becoming a zombie themselves.

So how do you survive a zombie apocalypse? First, you have to be prepared.

To Do: Discuss what to pack in a zombie apocalypse survival kit and put one together (hint these are great emergency preparedness packs to keep in the truck of your car.) Items you may wish to include might be:

To Do: Participate in a community service project that would help your community survive a zombie apocalypse.  Ideas might include volunteering to help with a community zombie game or holding an emergency supply drive for items such as flashlights, non-perishable foods, blankets and clothes and donating them to the Salvation Army, Red Cross or other organization that disperses emergency supplies to the public.

With the rise in popularity of zombies, the U.S. government realized that holding zombie apocalypse trainings would be a fun and engaging way to train for a variety of possible disasters.

The creators of CONPLAN 8888-11 “Counter-Zombie Dominance” document, chose zombies in order to explore unexpected, unplanned-for threats and learn how to strategically develop defenses for any possible variable or threat.

According to the DISCLAIMER in CONPLAN 8888-11, “This plan was not actually designed as a joke. During the summers of 2009 and 2010, while training augmentees from a local training squadron about JOPP, members of the USSTRATCOM component found out (by accident) that the hyperbole involved in writing a ‘zombie survival plan’ actually provided a very useful and effective training tool.”

You can read the entire CONPLAN 8888 training on the U.S. Strategic Command website.

The CDC also uses zombies to help practice for a variety of emergencies and pandemics.

To Do: Do one or more of the zombie activities for educators listed on the CDC website.

To Do: Using the CONPLAN 8888 document, create a scenario using one of the zombie types described and create a plan to deal with them. Read through the CONPLAN phases. How would these look against your chosen zombie type? What assumptions are you making about both the zombies and the situation at hand. Where would you find the zombies and why? For example in the CONPLAN it states, “Zombies do not drink water, but humans do. Humans typically cannot survive longer than I0 days without fresh water. Zombies will likely be drawn to potable water sources by the presence of human food sources that zombies prey on. Zombies can be expected to contaminate potable water sources with various contaminants during these attacks further limiting the supply of available potable water for humans.”

The special effects and make-up used to create the zombies you see on TV and in the movies take quite a bit of artistic skill. In order for the zombies to look and move in a realistic fashion, an in-depth knowledge of human anatomy and chemistry is needed. The tutorial below shows ways to make various types of fake blood, but to be a true special effects artist you still need to know which one to use to get the effect you want. Are your wounds half healed or freshly bleeding?

To Do: Create a zombie special effect such as fake blood, rotting skin or hanging guts.

To Do: Use make-up to transform your face into that of a zombie. Add more fun by designing a costume to go with it and practicing moving like a zombie as well.

Zombie crafts can range from quick and simple to complex and time consuming. Some just require some paper and glue while others may involve advanced skills like knitting or sculpting.

To Do: Make one or crafts with a zombie theme. Get creative and make an edible craft as well!