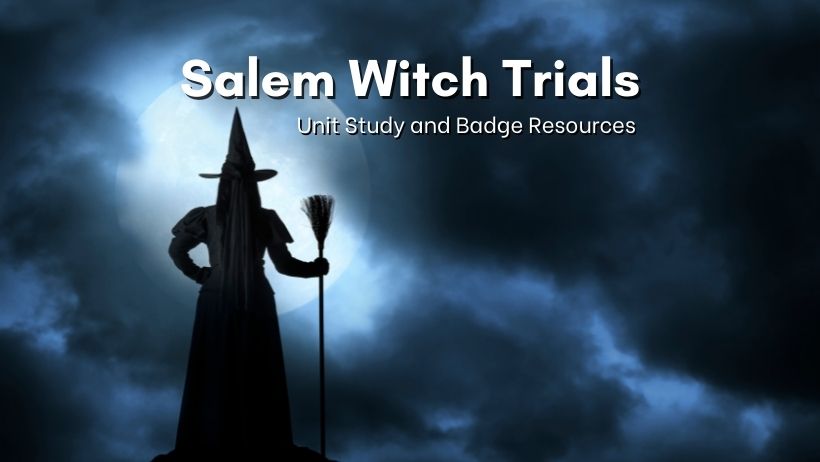 It is October so it is time for all things creepy. The Salem Witch Trials badge is a perfect history badge to work on as Halloween approaches. Use our free Salem Witch Trial Unit Study to get you started. Other badges you may wish to earn alongside might be Mythological Creatures (Specific for Witches), Biographies (Sarah Good or any other person burned for witchcraft) American History and U.S. Geography.

What Are the Salem Witch Trials?

In the year 1692 Salem Village, Massachusetts was populated by very strict religious Puritans with a strong belief in the devil. That year two girls, Betty Parris and her cousin Abigail fell to the floor twitching and speaking strange words. The local doctor said they were bewitched and the witch hunt began. Tituba, a Native American slave who worked in the Parris household, was known to have played fortune-telling games, which were strictly forbidden by the Puritans and was immediately accused of being a witch. Two other women who were not well liked in the community were also accused and all three were found guilty.

More girls and townspeople started accusing others of witchcraft and by the end of 1693, 24 people had died. While women were the most popular to accuse of witchcraft, some men and children were also killed as witches either by hanging or simply passing away in jail.

The trials were very unfair to the accused as the test for witches included torture and death. Eventually the courts finally stopped hearing witchcraft cases and all accused were pardoned in 1711.

To Do: Create a newspaper article about the Salem Witch Trials. What would your headline read? If you are earning this badge with a group, assign each person a different angle to cover and combine your articles into one newspaper.

Are You a Witch?

The Puritans had a variety of ways to test people to see if they were a witch and none of them were pleasant. The most well-known was the swimming test. The accused were stripped, bound, and thrown into the water. If they sank, they were innocent and if they floated they were guilty. This was based on the belief that a witch would not be baptized, and the water would reject them.

To Do: Make a list of 10 of your friends and family. Based on the different ways people were accused and tested for witchcraft, which of these people might have been convicted of being a witch? Why?

Can you imagine being an innocent person who is suddenly thrown in jail as a witch? Your crime may have been as simple has having spoiled milk in your home or to have been born with a birthmark.

To Do: Discuss how you think you would react if you were accused of witchcraft? Would you confess to avoid punishment or stand your ground and tell the truth? Compare the consequences of both options.

Where Did the Witch Trials Take Place?

Witch hunts were not a new concept and several countries throughout history have conducted them. These include Sweden, England, Scotland, Germany and France.

To Do: Using a map of 1692 Salem Village, color areas important to the Witch Trials. Include the homes of accusers and accused, where trials took place, and where prisoners were kept.

To Do: View the timeline map of accusations to see where the accusations of witch craft began and how quickly they traveled.

Since the Salem Witch Trials occurred nearly 350 years ago, how do we know what life was like back then? In addition to a variety of written accounts, artists made images of both the courtroom trials as well as various methods of testing for witchcraft. Even today, most federal courts do not allow cameras in their courtroom and sketch artists are used to document the proceedings.

To Do: Look at a variety of images of the witch trials. How do they compare to court sketches today? Make one of what you think the trials looked like.

To Do: Read through some of the articles and poems in the Salem Witch Museum Archives. Then write one of your own.