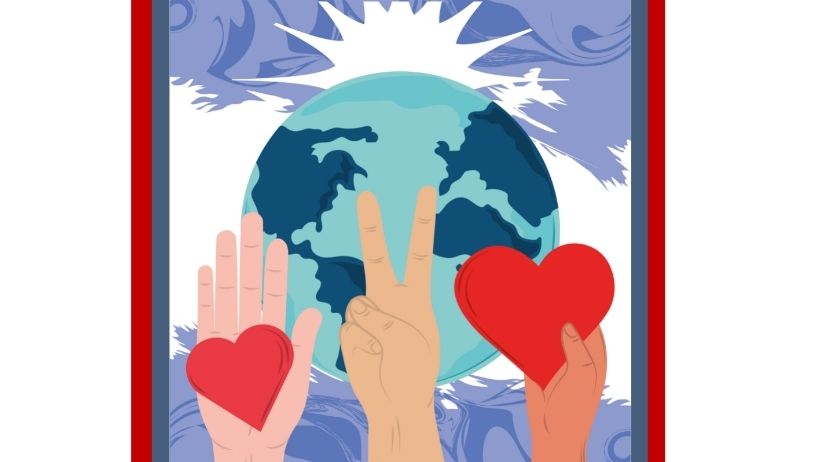 In today’s world where everyone seems to want to divide our nation in as many ways possible, World Peace is a timely badge. Whether it is politics, race, gender, the pandemic, or religion, humanity always seems to see anyone different than themselves as a threat. In this World Peace Unit Study, we will learn how to walk in other peoples shoes and to pursue peace throughout the world. Other badges you may wish to work on at the same time include badges such as Peace, Kindness, World Geography, United Nations or World Flags.

Prejudice and bigotry are the biggest obstacles to world peace, but what are they exactly?

Prejudice is an assumption or an opinion about someone simply based on that person’s membership to a particular group. Bigotry is defined as an obstinate or unreasonable attachment to a belief, opinion, or faction; in particular, prejudice against a person or people on the basis of their membership of a particular group.

Stereotypes and assumptions about people drive fear and hate, but we have much more in common around the world than we think. Did you know that nearly every world religion has a version of the golden rule? Love your neighbor as yourself. Scarboro Missions has a great handout that quotes the golden rule as written in the books of faith of 13 different world religions.

To Do: Choose a group of people different than yourself. Instead of focusing on what makes you different though, make a list of how many things you can think of that you have in common. Look at how they treat family and friends. What makes them smile? What makes them cry? What are their hopes and dreams?

To Do: As simple exercise compare and contrast the view point of someone living in a large city verses someone living in a very rural area of our country. Use the chart below to think about what issues would be important to each group and why. For example learning to drive may not be a needed skill in the city where public transportation is easily accessible, but is critical for rural people who need to drive an hour or more just to reach a grocery store.

To Do: Choose an issue that affects world peace such as the pandemic, weapons of mass destruction, over-population, religious tensions, or world hunger. While most people will agree issues like these need to be addressed to bring about peace, they frequently disagree on HOW the issue should be handled. Read articles or listen to several people speak about your issue that have differing opinions. What arguments do they make for their point of view. Discuss the issue with parents and friends. Do you all believe exactly the same? If not, are you loving or hateful towards those who believe differently than you?

There are many symbols that stand for peace. Visual representations of the concept of peace are quick way to unite people even if they speak different languages. The History Press has a good article on 10 different peace symbols and their history.

To Do: Learn at least 10 peace symbols and then design a new peace symbol of your own. Explain to others the symbolism behind the image you created.

World peace doesn’t just happen. It takes effort by everyone around the world. From simple kindness to a neighbor to treaties between countries, peace requires people to get involved and make a difference.

To Do: Start at home. Simple kindness and understanding go a long away in bringing about peace. Consciously be kind to those around you. Try to view things from their perspective before getting angry or making judgements. For example, my daughter, who was raised in the country, found the loud music of her apartment neighbors very rude and inconsiderate. When she talked to them about it, they were from the city where everyone played loud music and it was common practice. They never realized it would bother her. They were not trying to be rude, they had just never looked at it from a different perspective. Instead of getting angry and yelling at her neighbors, kindness and understanding brought two groups from differing backgrounds together who became friends.

To Do: Write a letter to the president of the United States, or to your congressman/woman asking specific questions about world peace issues. If you have ideas for them, feel free to share them as well. Include a return address so that they can write you back.

World Peace Day is celebrated every year on September 21. The International Day of Peace was established in 1981 by the United Nations General Assembly. Two decades later, in 2001, the General Assembly unanimously voted to designate the Day as a period of non-violence and cease-fire. The United Nations invites all nations and people to honor a cessation of hostilities during the Day, and to otherwise commemorate the Day through education and public awareness on issues related to peace.

Every year, the UN declares a different theme to the day. The theme for 2021 is “Recovering better for an equitable and sustainable world.” According to the UN, “In 2021, as we heal from the COVID-19 pandemic, we are inspired to think creatively and collectively about how to help everyone recover better, how to build resilience, and how to transform our world into one that is more equal, more just, equitable, inclusive, sustainable, and healthier.”

To Do: Celebrate International Peace Day on September 21. Ideas include:

Another famous peace bell is the World Peace Bell in Newport, Kentucky. The World Peace Bell was crafted to be rung on the first International Day of Peace in 2000.  It is the largest free-swinging bell in the world, weighing 66,000 pounds.

To Do: Find the nearest Peace Bell to you. When does it ring? Who made it and why? Create a peace bell of your own and decide when it should be rung.

Cartoons to Unite or Divide

Political cartoons have been used for decades to comment on events using satire. Unfortunately those cartoons and the modern day memes can frequently lead to even more division, hatred and fear as they capitalize on stereotypes.

To Do: Collect a variety of political/current event cartoons or memes and discuss them with your club or parent. Do you agree with the point of view of the cartoon? Is it done in a tasteful manner or in a way that invites further conflict? Design a cartoon of your own advocating world peace. See if you can get it printed in a local school or community paper.

To Do: Create a craft that will remind you to keep the peace. Ideas might include:

Peace Banner by Proud to be Primary