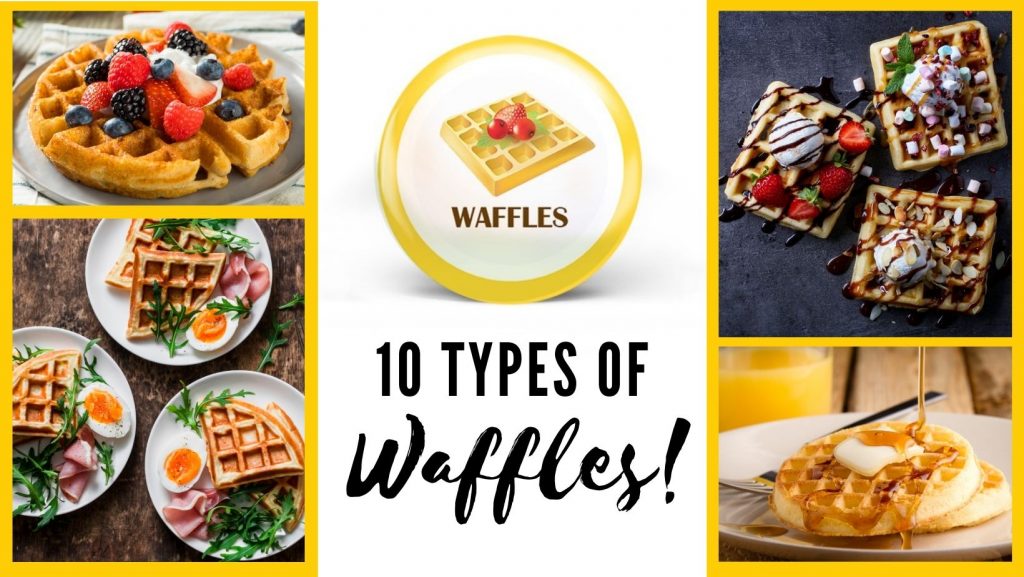 Who knew there were so many different types of waffles? If you are a waffle lover, earn our Waffles Badges. You can use our Waffle Day Resources to learn all you ever wanted to know about these tasty treats!

Over the centuries dozens of types of waffles have been created. Here are my top ten favorites.

Brussels waffles are big rectangular waffles that are crispy on the outside and fluffy on the inside with large deep pockets. Usually served for dessert with powdered sugar or whipped cream and fruit, these waffles are a favorite around the world.

Most American waffles are made with baking powder instead of yeast, such as the Belgium waffle listed above. A traditional American waffle is much thinner an denser than waffles made with yeast. The pockets on American waffles are also usually much smaller making them perfect for holding syrup or gravy in addition to the usual waffle toppings of fruit, powdered sugar or whipped cream. American waffles come in all shapes and sizes and are served for lunch or dinner as often as breakfast in some areas as dishes like chicken and waffles are very popular.

Toaster waffles are frozen waffles that can be taken straight from the freezer, tossed in the toaster and then eaten for breakfast. Invented in 1953 by the Dorsa brothers they were originally called Froffles for “frozen waffles.”

Liege waffles are similar to Brussels or Belgium waffles, but are smaller with a denser texture and a caramelized sugar coating on the outside that keeps the waffle from getting soggy if topped with fruit or cream. They are frequently sold by vendors as handheld desserts similar to donuts.

Pizzelles are crisp waffle cookies made with a decorative waffle iron and then sprinkled with sugar.

The Stroopwafel is my daughter’s favorite type of waffle. These delicious cookies are made from a thin layer of caramel sandwiched between two thin waffle cookies.

With all of these delicious options, which waffles will you eat today?