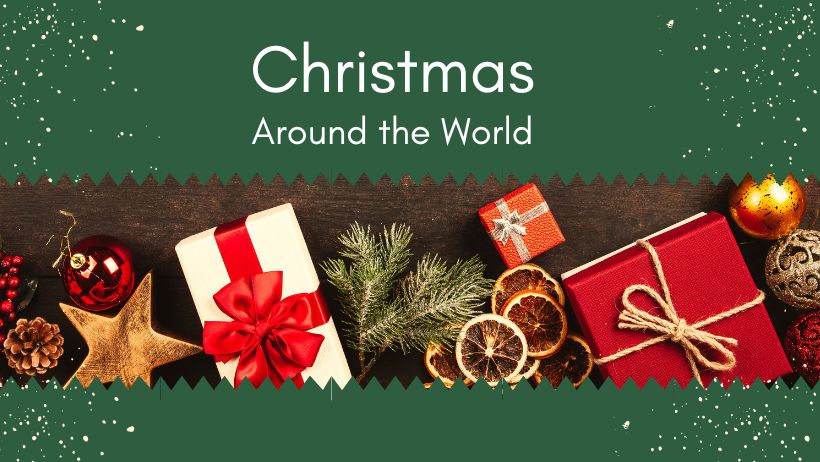 Christmas Around the World Unit Study and Badge Resources

Christmas is a great time to combine geography, foreign language, art and history as you study how this holiday is celebrated around the world. While earning your Christmas Around the World badge you may also wish to work on badges such as Christmas Ornaments, Christmas Carols, Holiday Specific (Christmas) or World Geography.

Christmas Celebrations Around the World

Every country around the world has its own stories, songs, recipes and traditions that revolve around the Christmas holiday. For example, in the Philippines, The Giant Lantern Festival is held each year on the Saturday before Christmas. Traditional Pilipino lanterns are roughly 18″ in size, but for the festival, groups compete to try to build the largest and most elaborate lanterns they can.

In Austria, they not only have stories of St. Nicholas, but also his evil accomplice Krampus. While St. Nicholas rewards the good little boys and girls, Krampus captures the naughty children in his sack and steals them away. In the first week of December, young men dress up as the Krampus (especially on the eve of St. Nicholas Day) frightening children with clattering chains and bells.

Fulfills first part of requirement #1 for all levels.

Christmas Tree Ornaments Around the World

What is a Christmas tree without Christmas ornaments? Believed to have originated in 16th century Germany, the Christmas tree and its ornaments have become some of the main symbols of the Christmas holiday. Originally, small evergreen trees were brought indoors and decorated with items such as candles, apples, nuts or berries. During the Victorian era in the 1800’s, ornaments became the fashion and evolved into much more elaborate decorations. Blown glass, tinsel, silk, paper and wool were all used to create small works of art to hang on a tree.

While Germany was the original manufacturer of most Christmas ornaments, and England helped to make them fashionable, by the early 1900’s Japan and several Eastern European countries had learned to mass produce Christmas ornaments and they became a global commercial commodity used all over the world.

To Do: Create a Victorian paper fan ornament.

The Kim Six Fix website has simple instructions for making paper pin-wheel fan Christmas ornaments. These traditional British ornaments are easy to make for all ages. Use fancy origami or scrapbook paper for the base of your ornament and old buttons or trinkets for the center.

In many ways, Christmas seems to be two distinctly separate holidays. There is the Christian holiday of the birth of Jesus and the secular gift giving holiday of Santa Claus. Many families celebrate them both and it is not uncommon to see a nativity set displayed next to stockings hanging from the mantle.

In the early days of Christianity, Easter was the main holiday. Believers did not celebrate the birth of Jesus. In the fourth century however, church officials decided to make the birth of Jesus an official church holiday. As the Bible does not give an exact date for the birth, the church needed to choose one. It is said that Pope Julius specifically chose December 25 in an effort to absorb the traditions of the pagan holiday Saturnalia which fell on that day.

To Do: Read the Christmas story in the Bible.

Food has always been a huge part of Christmas traditions. From a traditional “Christmas Goose” to fruitcake, there are some foods that only usually make an appearance during the Christmas season.

To Do: Make a list of foods that your family makes or eats each Christmas season. Where do your recipes come from? Are the traditional American recipes or are they from your family heritage in other countries? Write down the recipes and create a family Christmas recipe booklet to share.

To Do: Cook a traditional Christmas dessert from another country such as Zirochki, a jam filled sandwich cookie from Ukraine.

1. In a large mixing bowl, add 3 cups + 2 Tbsp flour and 2 sticks softened butter. Mix the dough together with your hands until it becomes a sandy texture with fine crumbles.

2. In a separate mixing bowl, add 2 eggs and 1 cup sugar and mix on high speed 5 minutes until pale yellow and smooth. Pour this mixture over the flour and mix gently with a spatula just until well incorporated.

3. In a small bowl, combine 1 tsp baking soda and 2 tsp vinegar and stir until well combined. Pour soda mixture into the cookie batter along with 2 Tbsp of liquid honey and mix it into the dough with a spatula until it becomes a solid mass. Cover with plastic wrap and let the dough rest at room temp for 30 min.

5. Divide the dough into 4 pieces and roll out one piece at a time. Keep the rest of the dough covered at room temp. Sprinkle a clean non-stick surface and your piece of dough generously with flour and roll it out to an 1/8″ thick round. If your dough is sticky when rolling, just add a little more flour.

6. Use a simple shaped cookie cutter to cut out shapes. Transfer cookie shapes to a cookie pan lined with parchment paper about 1/2″ apart. Collect the scraps and blend them back into your remaining dough so nothing is wasted.

7. Using a tiny cookie cutter or a other tool, poke a hole in half of your cookies. The hole will shrink quite a bit so make sure it is a bit bigger than you think it should be. You should have roughly 24 cookies with holes and 24 without depending on the size of your cookie cutter.

8. Bake at 350˚F for 5-8 minutes or until lightly golden on top. Watch them closely since they turn golden quickly. Remove from the oven and let cool to room temp.

9. When the cookies are room temp, spread the jam onto a solid cookie and top with the cookie with a hole. Press the sides together, then dip both sides in powdered sugar. These cookies can be eaten right away but are even better a few hours later or even the next day after they’ve had a chance to soften from the jam. These keep well covered at room temperature overnight or covered and refrigerated.

Merry Christmas in Many Languages

While Christmas is celebrated all over the world, each country does so in their own language. “Merry Christmas” doesn’t mean a lot if you happen to be in Poland.

To Do: Learn a Christmas song that uses Merry Christmas in a different language such as Mele Kalikimaka by Bing Crosby or Feliz Navidad by José Feliciano

To Do: Learn how to say Merry Christmas in at least 6 different languages and find the corresponding country on a map.

The Many Names of Santa Claus

From St. Nick to Babbo Natale, the character of Santa Claus and the customs that surround him vary by country. For the most part he is always represented in fashion as mysterious yet benevolent figure who gives gifts to children.

A few different variations of Santa include:

To Do: Choose a country and draw what you think their idea of “Santa Claus” looks like.

Fulfills the second part of requirement #1 for all levels.

America is known as the “melting pot” as we have citizens and residents from countries all around the world. Each family brings family traditions with them when they come to our country. Many times these traditions are shared with others and adopted by other families. Where is your family from originally? What Christmas traditions do you follow that may have originated in another country?