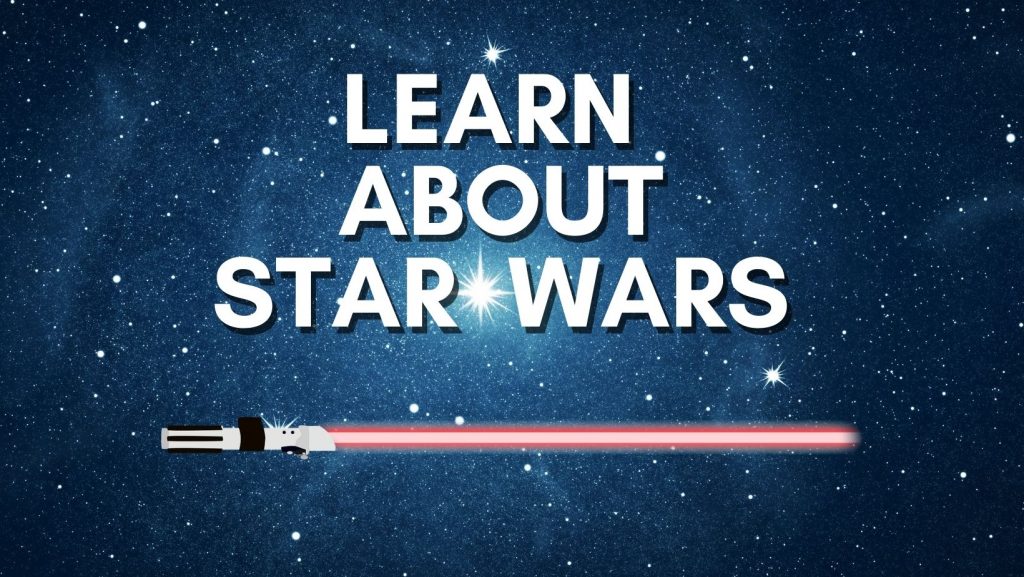 Use this Star Wars unit study to help you earn the Learn About Star Wars badge. Other badges you may wish to earn alongside include the Movies (specific) badge, Costume Design badge, or the Digital Movie Making badge.

Star Wars movies are not usually appropriate for small children.  Keep in mind that all kids are different, so assess your child’s ability to handle peril and conflict before you allow them to earn this badge. Common Sense Media has a great article that breaks down the Star Wars universe into age appropriate sections.

The first step to learning about Star Wars is of course watching as many of the movies as possible. Younger children, for whom the movies may not be appropriate, can start with reading the many children’s books that take place in the Star Wars Universe or with the Lego Star Wars movies in order to familiarize themselves with the various characters and world.

Once you have good understanding of the stories, worlds and characters, start learning your Star Wars Trivia.

To Do: Play a game of “Who Am I?” Write the names of the main characters of Star Wars on index cards. Have one card for each player. Tape a card to each player’s back being careful not to let them see it. On “Go!” players must ask questions about who they are. All questions may only be answered with a “yes” or a “no”. See how long it takes for all players to guess who they are.

To Do: Test your Star Wars trivia knowledge on UsefulTrivia.com.

Star Wars first hit the big screen in 1977, but since then has exploded into books, video games, animated series, toys and more.

To Do: Create a timeline of Star Wars History with at least 15 items

Here are the release dates for many of the movies to get you started:

Want to add items like when various Lego Star Wars sets were released? Read Celebrating 20 years of LEGO® Star Wars™ fandom on the Lego website. Click on the timeline template below to download and print. Tape two or more copies side by side to extend your timeline. Draw pictures in the boxes to represent each event.

Create your own Star Wars character, complete with planet and transportation. What will they look like? What personality do they have? Would they be a leading character or a side-kick? Draw a picture of your character and do one of the following:

The Star Wars franchise has made a cultural impact on everything from movies to fashion. The first Star Wars movie changed the way science fiction movies were made. From the storyline to the visuals, Star Wars was something never seen in cinema before. Learn more from the Beacon Beat on how Star Wars Impacted Cinema and Pop Culture forever.

As much as cinema changed, so did American culture. Movie tie-in merchandising on a large scale didn’t exist before the “Star Wars” franchise became a pop culture phenomenon. According to a ScreenRant.com Star Wars actually earns more from licensed products than ticket sales. People have become so passionate about Star Wars that there is an annual convention just for the fans. The annual Star Wars Celebration is a gathering of fans from all over the world where people cosplay their favorite character, attend questions and answer sessions with favorite stars, behind the scenes information, photo opportunities and more.

To Do: Research the ways in which Star Wars has affected cinema and pop culture. Write an essay to support your opinions or hold a discussion with friends or family regarding the effects of the Star Wars franchise on society.

The first Star Wars movie was so visually appealing compared to other movies of the time that it changed how movies were made.

To Do: Watch the videos below on both the making of Star Wars as well as how each Star Wars trilogy left its own impact on the movie making industry.

The Star Wars franchise is much bigger than just a series of movies. The original trilogy has spun off into not only more movies, but TV shows, animations, toys, video games and more. According to Brandora, a network of the licensing industry used as a digital meeting point, Star Wars is the #1 licensed franchise of all time. Look through the extensive list on Brandora of the licenses Star Wars has granted to various companies for products that stretch from stickers and card games to apparel. If you click on the word “products” on the right side of the spreadsheet you can see each individually licensed product.

To Do: Visit your local department store, or large retail store like Walmart or Target. Take a guess as to how many different Star Wars items you will find inside. Search the store and keep count of how many different items you can find. For older kids, take it a step further and track how many items were found in each department. Look carefully. Star Wars can be found represented on everything from Kraft Macaroni and Cheese boxes to lunch pails. Search each department thoroughly.

Costumes play a big role in Star Wars as they help to create the world and the unique characters. Learn about the history of the Star Wars costumes and how they were designed. George Lucas wanted a very military look rather than the traditional science fiction costumes and he took inspiration from everywhere including samurai culture which inspired Darth Vader’s helmet.

The annual Star Wars Celebration is a gathering of fans from all over the world where people cosplay their favorite Star Wars character, and attempt to look and act just like the original character.

The music used in films is as important as the costumes. Through music, the director can add emotion and suspense. According to David Penn, founder and editor-in-chief of Hit Songs Deconstructed (a source for songwriting trends and analysis), the opening Star Wars theme song is  “arguably the most recognizable and iconic theme in cinema history.” Star Wars uses leitmotifs, a melodic phrase that accompanies the reappearance of an idea or person throughout the movie.

To Do: Listen to the video below which matches the leitmotif to each set of characters or themes. Think about how the music makes you feel about those characters or idea. How does the composer use music to control your emotions? If you play a musical instrument, try writing a piece of music that represents you that could be used as a leitmotif.

Music in Our Homeschool offers a Free 15 Minute Star Wars Music lesson. Included in the lesson are audios of 6 of the main Star Wars themes. It is a great place to learn more about the Star War music .

Star Wars characters are drawn in a wide variety of forms from cartoon to realistic art.

To Do: Learn to draw one of your favorite Star Wars characters or find free pintables for younger kids to color in.

Drawing Tutorials 101 has advanced drawing tutorials for a variety of Star Wars characters.

Fulfills an optional requirement for any age level.

May the 4th be with you!  What better way to celebrate National Star Wars Day than with a party. Invite your friends to dress up as their favorite Star Wars character and come train to be a Jedi.

We have put together instructions for throwing a fun Star Wars themed party complete with food, decorations and games. Visit our page, How to Throw a Star Wars party for complete instructions.